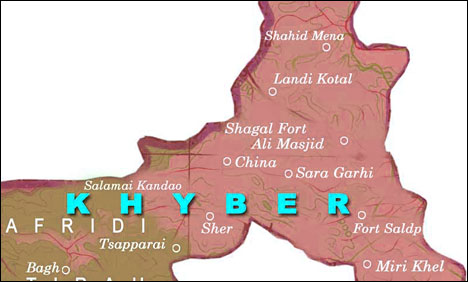 Khyber Agency, September 26: A planted bomb exploded on the road side of Pak-Afghan highway in Jamrud area of Khyber agency killed a Khassadar Force official and injured another security official, FRC learnt.

According to details, a Khassadar force was killed while another official was injured when a bomb exploded planted on the road side of Pak-Afghan road near Jamrud in Khyber Agency.

The political administration said that both the victims were on duty for the secure passage for NATO containers’ movement through the area.

The bomb was planted in the bushes near Taidy Bazaar. The injured were shifted to a hospital in Peshawar where Mr Amjad from Khassadar Force succumbed to injuries.

In another incident two Pakistanies were deported from Afghanistan and were handed over to Political Administration at Torkham Pak-Afghan border.

According to the details, two Pakistan citizens Yunas s/o M.Afzal and Mausoom s/o Ajab Gul were deported by Afghan government and handed over to the political administration of Khyber Agency that shifted them to Landikotal Jail.

Both of deportees Punjab Province origin were laborer but lacking the necessary visit documents that resulted their deportation.