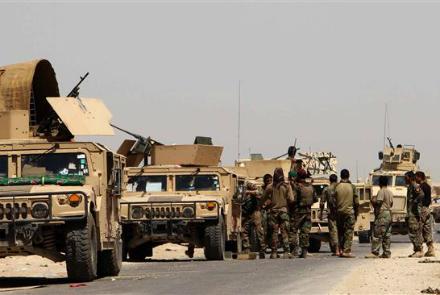 Paktia: The Afghan intelligence operatives foiled a plot by the Haqqani terrorist network to carry out a coordinated attack in Gardez city, the provincial capital of southeastern Paktia province. The National Directorate of Security (NDS) in a statement said that a group of eight insurgents were arrested in connection to the attack plot. Khaama , Pajhwok

Kabul: The violations along the Durand Line were on the agenda of the high level defense meeting chaired by President Mohamamd Ashraf Ghani where other issues related the security were discussed. The meeting was focused on the security situation of northern and northeastern provinces of the country, including Takhar, Badakhshan, Faryab, Kunduz, and Uruzgan. Khaama

Farah: The Taliban insurgents have executed at least seven passengers in the vicinity of Bala Bolok district in the western Farah province of Afghanistan. Khaama , Pajhwok , Tolo News

Nangarhar: A Taliban commander has been killed during the latest infighting among the Taliban insurgents in the vicinity of Bati Kot district eastern Nangarhar province of Afghanistan. Khaama

GHAZNI: The police chief for Qarabagh district of southern Ghazni province was injured during a clash with Taliban insurgents who lost a dozen fighters to the overnight battle. Pajhwok

Kunar: Nearly a dozen Daesh (Islamic State) insurgents have been killed in a US drone strike in the Watapoor district of eastern Kunar province. Pajhwok

Trump To Unveil War Strategy Only After Review Completed

A White House spokesperson during a press conference said that the new US strategy will be rolled out only once a full review process on the Afghan situation has been completed.  Tolo News