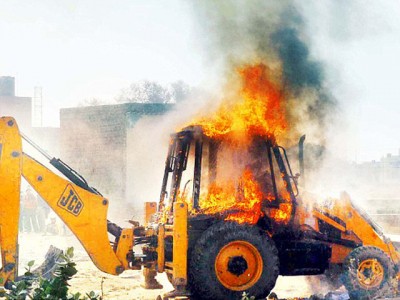 As per details ablaze machinery consists of three excavators, two tractors, a bulldozer, a dumper truck and a pick up vehicle.

Shelman is a distant area of sub division Landi kotal, located in its north, of Khyber Agency. The contractor has been busy in the construction of the road from Narai to Loy Shelman for a long time.

When FRC contacted the area political administration for details they revealed that attack could be came from across the river Kabul either from Mohmand or from neighboring Afghanistan.

“The private contractor was assigned the task to complete few kilometers road from Narai to Shelman area, which is around forty kilometers away from Landi Kotal” and “the armed attackers might have come from across the river Kabul”, said an official of the administration with the condition of anonymity.

A team of Khasadar force under the command of tehsildar Landi Kotal visited the spot and gathered first hand information from the locals and laborers.

So far no militant group has claimed the responsibility of the attack.

The reason of the incident could not be ascertained and is feared that in repercussions works on under construction road might get delay for an indefinite time.