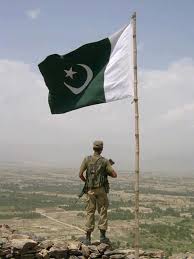 Bannu, Mar 24, 2015: The Army in-charge of Temporarily Displaced People Camp Bakka-Khel, Brigadier Mukhtar, reiterated here on Monday the resolution of the Pakistan Army to wipe out all terrorists from the tribal belt of Pakistan and urged that under current circumstances there is no room for negotiations with the terrorists, FRC learnt.

He expressed these views during a ceremony organized in Bakka-Khel are of FR Bannu in connection with Pakistan Day celebrations.

“The Army is determined in locating and hitting hard the terrorists’ right from the caves of Waziristan to the plains of Karachi”, said Brig. Mukhtar.

The in-charge of the camp revealed that it were the terrorists that had made the lives of the locals of NWA terrible by imposing their unique and controversial Islamic code of life. The government of Pakistan offered them table talks a number of times but the insurgents’ frivolous attitude led to the failure of the talks and compelled the former to take stern action against them.

“In the launched operation Zarb-e-Azb the Army has cleared the area from terrorists”, added the Brigadier.

He also made it clear in his speech that the repatriation of the displaced people will start as per given schedule and would be a phased process. He praised the sacrifices being made by the natives of North Waziristan Agency along with the Army in bringing back the lost peace to the agency.

“Peace to the war torn area was made possible with the countless sacrifices of the natives of the agency and the valiant soldiers of Pakistan Army”, said Brig. Mukhtiar.

The tribal elders at the occasion also up held the commitment to keep intact, the peace achieved in the agency and to stand against those who try to disturb it.

The people rejoiced the celebration with Pushtoon cultural Attan (a unique dance with the beats of drum) and singing national songs.