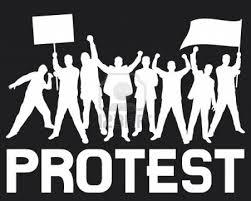 Protest Against Kohat Board Held in Kurram Agency

Parachinar, June 29, 2015: Locals, tribal elders and representatives of political parties and civil society organizations staged a protest rally at Parachinar in Kurram Agency here on Monday against the poor performance of Kohat Board during the past several years and demanded to change the board. The protesters were holding placards and banners inscribed with slogans against the administration of Kohat Board, FRC learnt.

A number of mainstream political parties representatives, elders of Turi Bangash tribe, and members of civil society organizations, teachers, students and member of other religious organizations attended the protest.

Speaking in a joint press conference elders of Turi Bangash tribe denounced the inefficiency and poor performance of Kohat board which has created serious academic issues for the already marginalized student of the area.

“At any cost we will not allow Kohat Board to play with the future of the young and talented student of the area” Said a tribal Elder.

“Those students who used to top their schools exams got three or four marks in the board exam of Matriculation, which is unacceptable and beyond understanding” Said a Malak Sajad Hussain.

The speakers in the joint pressconference denounced the corrupt practices of Kohat borad and threatened to file a case in court against the board officials for they, through proper planning are trying to destroy the future of young and talented student of the agency.

“We have decided to take legal action against the board and will take the matter to court” said Muhammad Taqi.

After the joint press conference, tribal elders recorded a peaceful protest in front of political administration office and formed a committee to lodge a case against Kohat Board.