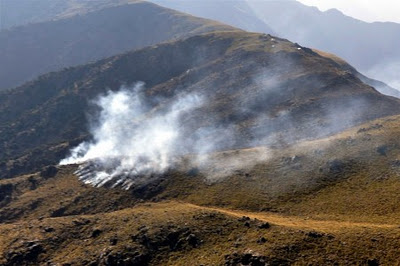 BAJAUR AGENCY, October 3: A security forces picket was attacked by unknown miscreants in Sheikh Kali area of Bajaur Agency here on Wednesday in which one security man was injured while one militant was killed in retaliation.

According to details provided by the officials of local administration, a group of unknown militants fired several rockets and mortars at a post of Bajaur levies force at Sheikh Kali area that is located around 18 Km from Khar, the head quarter of Bajaur Agency. Upon firing, the volunteers of the nearby Village Defence Committee (VDC) and levies personnel took their positions immediately to confront the attackers.

The officials added that the forces successfully repulsed the attack and killed one of the attackers. However, a security man identified as Attaullah received wounds during the retaliation.

The body of the militant was taken by security forces to levies line in Khar for further investigation, however, the other attackers managed to escape from the scene.

After the attack the local administration deployed additional personnel at levies posts situated at tehsil Khar.

No one has, till the filing of this report, taken the responsibility of attack.
The administration in collaboration with the security forces and members of VDC launched search operations after the attack.