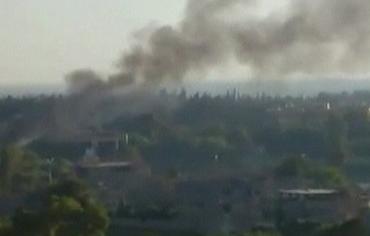 Attack on Local Commander in Orakzai

Kurram Agency, Oct 03: Fifteen militants died while more than twelve were wounded, when a suicide bomber blew himself within the central headquarters of local Taliban in Speen Tall area of Orakzai Agency here on Thursday, FRC learnt.

The suicide attacker blew himself in the limits of Taliban headquarters around 9am today (Thursday).

According to reports, soon after the first attack members of Mullah Nabi group shot dead two more ‘would be’ suicide bombers near the headquarters upon suspicion.

Since the incidence in morning, the area has been found in a grip of stern tension and severe firing shots have been reported till the filing of this report.

TTP spokesman Shahid Ullah Shahid while talking to FRC took the responsibility of the attack.

“Our daring fighters carried out this attack and our aim is to eliminate the TTP dissidents in Orakzai Agency”, said the spokesman.

Mullah Nabi was previously having links with TTP but upon developing differences with them, the incumbent declared himself Taliban Commander in Speen Tall area and refused to accept the commandments of Waziristan based TTP leadership.

TTP has made a number of attempts in past to dismantle Mullah Nabis’ network in Orakzai but so far they remained short of success.

The position of the area has given a unique and added advantage to Mullah Nabi as Speen Tall borders NWA in its South while in East it shares its borders with Tall area of district Kohat, and in North a narrow belt of land connects it with Orakzai Agency. The area comprises difficult and inaccessible hilly terrains making the communication means difficult for the locals.