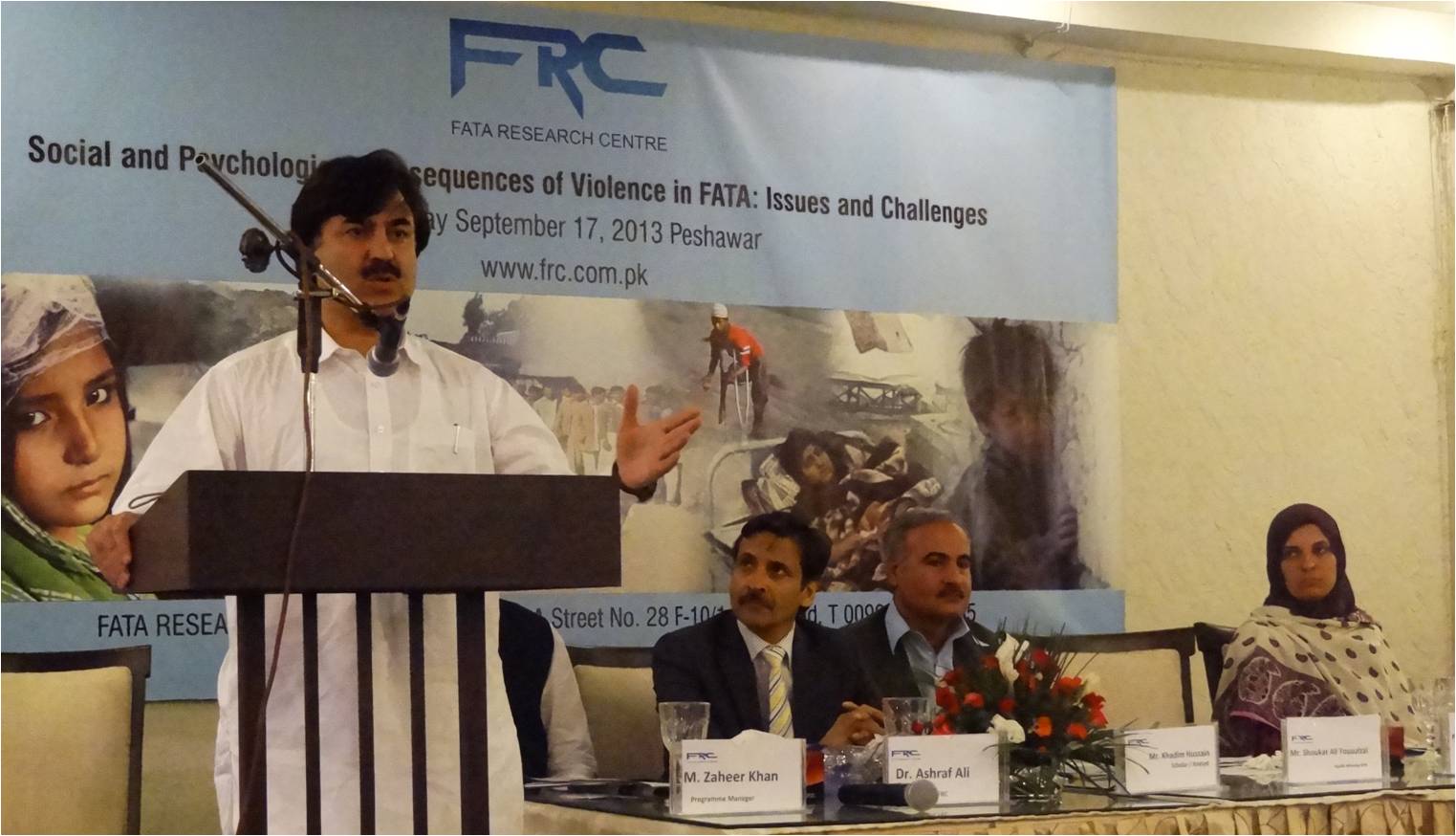 Social and Psychological Consequences of Violence in FATA: Issues and Challenges

Peshawar, 17 Sept: The current wave of violence in Pakistan, particularly in FATA is not a simple phenomenon to analyze. FATA has become an ever chaotic society Pakistan has ever seen in its history. This is an unwanted gift that ‘war on terror’ has given to this society. Military operations, suicide attacks, explosions, drone attacks and even safety precautions such as long curfew hours have caused serious psychological and social issues among the people. The traumatic situation in FATA is unprecedented and the people of FATA are reported to be facing serious social and psychological problems.

The so called ‘war on terror’ has engulfed their social setup, have made their lives stagnant and also have made them stuck in the dark pit of multiple problems that are of different nature. People make society and all the sectors of the society be it economic, political, religious if gets trapped by any unfavourable force always affect the social life and the psyche of the masses. FATA is in diabolical hold of insurgency.

This was the crust of the seminar conducted by FATA Research Centre titled “Social and Psychological Consequences of Violence in FATA: Issues and Challenges” here at local hotel in Peshawar on Tuesday.

Provincial Health Minister Shoukat Ali Yousafzai was the chief guest of the event while other scholars, politicians, researchers and civil society members addressed the participants. Addressing as key speaker Shoukat Ali Yousafzai said that his government was sadden over the trauma tribal people faced over decade but his government would met the promises for restoring peace in the region through negotiations.

He presented his views on ‘Psycho-social issues:Role of government and Challanges’. He elaborated that how government is taking relevant steps to deal with this issue so it can help normalize the society and make it retain its original shape again. ‘The steps taken by Government are worth appreciating and it is trying its best to compensate the losses and damages, the society of FATA has faced in the war on terror through different rehabilitation and aid programs with the help of international donors’.

Writer and psychologist Dr. Khalid Mufti in his speech said that hundreds of patients daily visiting psychological therapy centers where the majority of patients belonging to FATA. He added that due to continuous militants’ attacks, drone strikes and bomb blasts in FATA the inhabitants suffering depression, tension, anxiety and other psychological problems. Mufti demanded that government to establish psychological centers for the rehabilitation of the sufferers.

Dr. Khalid Mufti explained in detail that how war, militancy and army operations have made all the fragments of society inert in their core and that has affected the psychology of the people. He told about his experience and his daily encounter with his patients. ‘The 50% patients I encounter are suffering from more than one type of psychological disorder and the percentage of patients keeps on increasing with the time’ he said. He further explained the nature of specific disorders that are mostly common in his patients and whose backgrounds somehow mostly links back to the ongoing war in the area, ‘depression, suicides, PSTD, and phobias are the mostly psychological disorders I have come across that are the resultant affects of this unwanted war’ he further elaborated.

Writer and researcher Dr. Khadim Hussain while addressing the audience said that the militancy in Pakistan especially in FATA was the outcome of the unrest of Afghanistan which was created by powers fighting today against terrorism. He went further to add that peace was not possible without peace in Afghanistan. The government should quit strategic depth policy for Afghanistan instantly, he demanded.

The fear of suicide attacks, military operations and especially the drone attacks have led to severe social consequences that have affected the inhabitants of FATA on individual/psychological level as well. The natives of FATA complain that drones and militant attacks have left their Bazaars empty and terrorized, have vacated their mosques, eliminated their Hujras (community center), made ineffective Jirgas (council of elders) and decreased the number of participants in the funeral ceremony as people fear of any possible attack on them. It is important to note that to a lot of extent the tribal life is incomplete without the above mentioned social elements hence local people are not living their lives in full blaze. Pakistan’s participation in the anti-terrorism campaign has led to massive unemployment, homelessness, poverty and other social problems and ills. In addition, frequent incidents of terrorism and displacement of the local population have severely affected the social fabric of FATA.

In 2009 the Sarhad Hospital for Psychiatric Diseases (SHPD) recorded about 97,000 psychiatric cases from the violence-hit areas of FATA. It has been estimated that one in six carries few symptoms of psychological illness. Approximately 90,000 patients examined at a local hospital of FATA in 2011, about 50,000 had been exposed to militant-related violence or to the military operation.

The purpose of holding this seminar was to discuss the impacts of violence on the social and psychological behavior of the people, transcript the stance of government officials and different political parties on the issue, share the feelings of people directly affected by such activities and find out solutions for the betterment of the people of FATA. Speaking on the occasion, Dr. Ashraf Ali gave his analysis on how badly the region is trapped in militancy and how this evil has sabotaged the social life of the common man.

Dr. Sanya Ismail conveyed her views on the ‘visible social impacts’ as being the member of the affected society and also an expert psychiatric, she highlighted the major and prevalent social evils that the society of FATA has faced in the decade long war of terror. She said, ‘the social evils like broken families, frustration, suicidal attempts, suppression etc are the common and visible social impacts of this war and curfews imposed in the region’.

In the concluding session Dr. Ashraf Ali gave his remarks on the issue. He said ‘we all as a member of the Pakistani society have a responsibility to perform, our role as an individual member in eradicating this evil is important and on individual level we should kill the fear that has spread in our blood and which is the root cause of evils. We have to normalize our lives ourselves because God help those who help themselves’ and in the end he thanked all the guests/speakers/participants for their active participation.