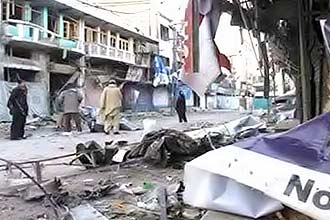 PARACHINAR, Sep 11: Fourteen killed and more than 80 persons including two women injured when a suicide attacker rammed explosives-laden vehicle with other vehicles parked at Turi market near Kashmir Chowk of Parachinar on Monday afternoon.

Eye witnesses said that white color explosives-laden Corolla crashed onto the vehicles parked in Turi Market at 2:40 pm that went off with a big explosion which was heard miles away from the spot. They said that people went out of their homes and rushed to the spot in the search of their relatives.

People of the area fetched the dead bodies and injured to nearby hospitals in the private vehicles. Hospital’s sources said that two persons had died on the spot while twelve other succumbed to their injuries in the hospital. More than eighty people including two women and two security personnel were injured in the blast, sources added.

Local sources said that the chassis number of the explosive-laden car had been omitted while the Engine number of the car was 212083. Sources added that six vehicles parked in Turi Market were badly damaged and more than twenty shops were shattered into pieces in the incident.

Torri Bangash tribe condemned the incident and announced three days mourning while the Parachinar Bazar was completely closed after the incident.