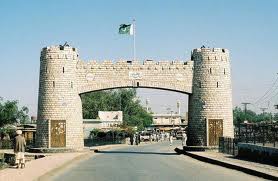 LANDIKOTAL, June 25: The growing differences between the top two officials of Khyber Political Administration has been hindering the smooth functioning of the administrative machinery in dispensing quick and fair services to the locals of the agency, FRC learnt.

According to details the Political Agent Khyber Agency Motahir Zib Khan has been at odds with the Assistant Political Agent Lankdikotal Dr. Azmat Wazir for the past few months. The trust deficit between the officials has reached to a level which has now a direct impact over the interests of the public of agency. As this incompatibility has now started delaying the decisions of the administration in convening Jirga’s and resolutions of other disputes of the people.

“PA Khyber has reportedly debarred APA Landikotal of his powers by removing his security guards”, an official of the administration told with the condition of anonymity.  This action has perturbed the APA considerably while keeping in view the current security situation of the agency.

The sources further added that, “Political Agent has entrusted Tehsildar Landikotal to report to him directly without consulting the APA”. This situation has exaggerated the decorum of the office as people having cases in the Tehsildar office gets undue delay in its resolution which resultantly has annoyed the public.

“Quarrels among rival groups took place in the compound of Tehsildar few days back due to the lack of his availability to resolve public grievances and dispute cases”, said the sources.

All the transfers and postings of the Khyber Khasadar Force (KKF) and Khyber Levy Force (KLF) are done by PA Khyber directly without taking APA on board as per legal procedures, sources revealed while commenting on the widening gulf between PA Khyber and APA Landikotal.

However, when we contacted tehsildar Landikotal, Arshad Khan, to record his statement about the situation he rejected all these allegations and termed it as baseless.

Similarly on last Thursday PA Khyber asked Tehsildar Landikotal to arrest four personnel of KKF deployed on Landikotal by-pass road allegedly involved in taking bribes from the truckers. “This task was under the jurisdiction of APA Landikotal but was assigned and performed by Tehsildar ”, said the official.

It was also learnt that PA Khyber has directed the junior officials of APA Landikotal office to submit the income from check posts directly in Khyber House Peshawar, which clearly depicts the level of trust deficit existing in the administration hierarchy.

The locals of the tehsil LandiKotal faces hardships in getting their legal processes on time and has requested the administration to find a solution to end this deadlock as soon as possible in the larger interest of the community.