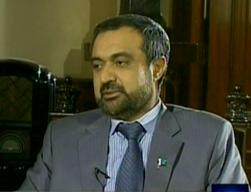 Governor KPK Vowed to Work for the Area’s Uplift

BAJAUR AGENCY, June 24: Khyber Pakhtunkhwa Governor Engineer Shaukatullah said that the government would soon launch projects of basic civic facilities in the tribal region and urged the tribal elders to play their due role in maintaining peace and writ of the government in the agency, FRC learnt.

He said this while addressing a tribal Jirga here at Khar on Friday during his visit to Bajaur Agency. Elders, members of peace committees and officials of local administration were present on the occasion.

The governor said that peace is a prerequisite for the development of the agency and elders should continue lending their support to government for its establishment.

He added that security threats should not be ignored although the writ of the government has been established in the region.

The Governor said, “The government had increased the funds of the annual development program for Fata in the federal budget 2013-14 and these funds would be spent in providing basic facilities to the tribal people”.

He further elaborated that the feasibility of Fata Medical College and Cadet Collage in Bajaur Agency have been finalized and the proposed projects would be launched soon.

“The Local administration would devise monitoring committees who will assure the quality of work in these schemes”.

Meanwhile, the administration officials briefed the governor about the ongoing projects in the agency.

In another development from the agency a member of peace committee died while another received injuries when a road side remote controlled improvised explosive device went off near the Pak-Afghan border area of tehsil Chamarkand in Bajaur agency here on Saturday.

According to the officials of Bajaur local administration, members of the local peace committees Khateer Khan and Abdul Sattar Khan were inspecting the site of an earlier road side bomb blast when another implanted device went off.

“Khateer Khan died on the spot while Abdul Sattar Khan was wounded seriously”, Ghullam Saidullah Khan a senior official of the administration told.

After the blast members of peace committee and local residents rushed to the site and shifted the injured to the local hospital for treatment.

The local administration in collaboration with the members of local peace committee launched a joint search operation in the area and arrested several suspected. “It is pre-mature to level the charge against anybody as the investigation is in preliminary stage”, the official said.