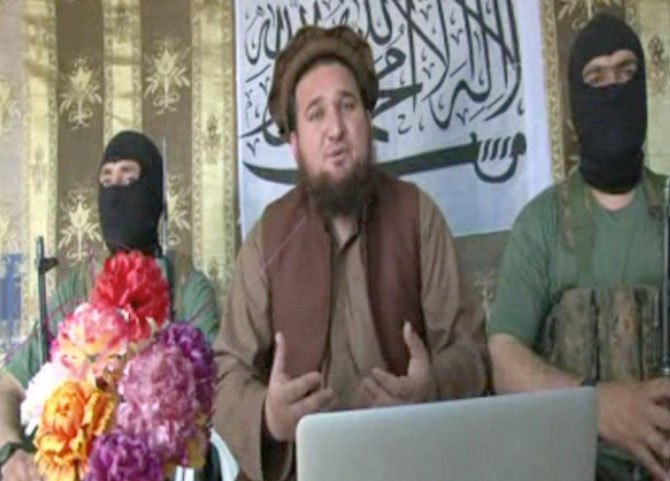 TTP Embedded Signal of Talks in a fresh Video Release

Miranshah, June 26: Tehreek-i-Taliban Pakistan in a fresh move has sent an embedded green signal to the federal and provincial government of KPK of peace talks but with the condition of showing their seriousness and confidence in dialogue, FRC learnt.

The fresh interview was recorded somewhere, probably, in the mountainous region of North Waziristan agency and was released on Tuesday. In the video Ehsan-Ullah-Ehsan, spokesman for TTP was shown sitting with the Mohmand Agency head of Shoora Dr. Assad.

While commenting on the prospective peace dialogue with the Pakistani government he said that they can take the option of dialogue under consideration once again but will gauge first the seriousness of the people sitting in the corridors of powers both at center and at KPK province.

“We will closely watch the level of willingness and confidence of Mian Nawaz Sharif’s government at center and Imran Khan at KPK about the peace dialogue”, said the spokesman.

“If we found the government capable of striking peace pact with us (TTP) we will respond positively”, said Ehsan Ullah Ehsan.

He further said, “In the past the organization (TTP) had shown their trust in PML-N leader for the peace dialogue and again we are looking towards his government willingness”.

In his speech he condemned the role of establishment and the spy agencies of the country of their non-serious attitude towards the peace talks with Taliban.

While responding to a question about polio vaccination in the country he said that they are having certain reservations regarding the polio campaigns but once they are readdressed we will promote healthy polio campaigns in tribal belt.

He further added that they have already announced of taking avenge of Ajmal Kasab and Afzal Gooru who lost their lives in the holy war against infidelity.

He stressed the Mehsud IDP’s of South Waziristan Agency to stay away from repatriation to their towns as the peace situation there is still volatile. “Media have no access to the restive agency and hence presents an oblique and vague picture”, said the spokesman.

“We will let them know of repatriation once we feel confident of peace and stability there”, he further added.

Mr. Ehsan refuted the media reports in his strongest words about a ridge between Afghan Taliban and Pakistani faction of Taliban.

“Afghan Taliban and Tehreek-e-Taliban Pakistan are two facet of one thing, how can be we on hot terms with one another”, elaborated Mr. Ehsan.

In a bid of solidarity towards Mullah Mohammad Omer, he declared him as the supreme leader of Taliban on both the sides of Durand Line. “How can we deviate from the directives of Mullah Omer who is our head mentor”, asked Mr. Ehsan.

He also clarified about the death of Wali-Ur-Rehman; organization’s second in command, who died in a drone strike in North Waziristan Agency, “Media reports of involvement of Taliban in spying for Wali are baseless”.

In the same connection he warned the journalists to stay away from leveling allegations against the Taliban, “otherwise we will give you a lesson”, he further said.