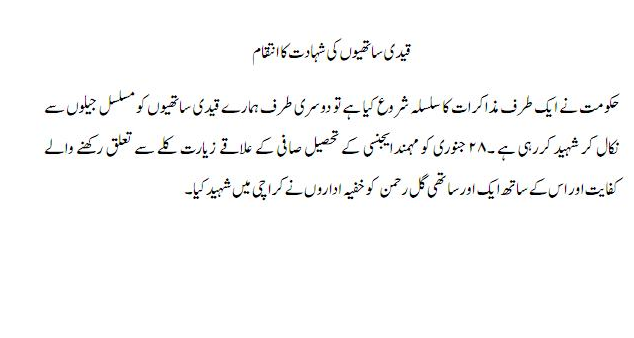 According to Umar Khalid Khurasani, head of TTP Mohmand Agency Chapter, the killings have been carried out in retaliation to the mysterious killings of their commanders/members across the country.

Umer Khurasani while giving details about the incident, in a written statement sent to FRC through email, said, “to take avenge of our killed imprisoned comrades we put to death twenty three FC soldiers that were captured by TTP fighters from Shoonghari Post, located in Mohmand Agency, in June 2010”.

We had conveyed our message several times to the government to stop these killings but in vain.

“The government of Pakistan didn’t stop their activities directed against TTP despite our several warnings” and “the organizations’ fighters knew how to avenge their killed comrades”, Khurasani revealed.

Umer Khurasani criticized the stance of government of Pakistan and said that on one hand they are holding peace talks with TTP but at the other they are silent spectators to the continuous killings of imprisoned TTP members across the country.

He further stated that, “one of our major conditions for peace talks is the release of our imprisoned commanders locked up in different Jails across the country as we take care of our fighters”.

At the end he urged the government to take stern actions over the killings of imprisoned TTP members and play their due role in ending it otherwise the organization will react more vigorously.