BREAKING NEWS
GMT+5 03:29
Home Breaking “We will Take Our Ways to Miranshah If Government didn’t Provide Us Plan” 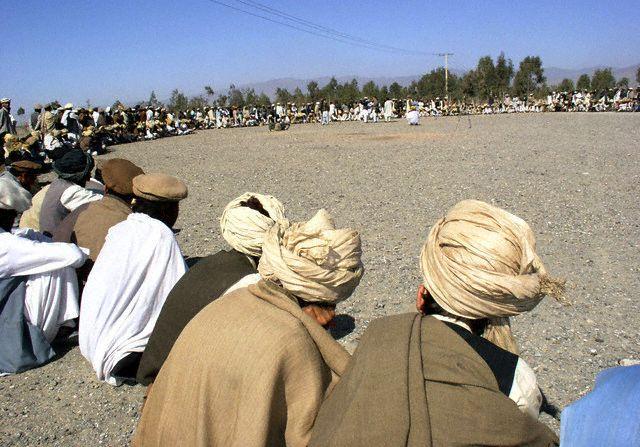 Bannu, May 21, 2015: Displaced tribal elders from North Waziristan Agency held a grand Jirga here on Wednesday at Bakka-Khel area of FR Bannu and demanded of the federal government to immediately take steps for their repatriation to their home towns otherwise they would act by themselves which might prove harmful not only for the displaced people but for the federal government, too.

This decision was unanimously agreed upon by all Uthmanzai and Dawar tribal elders present at the grand Jirga.

The grand meeting was attended by all displaced people from North Waziristan Agency and the member of national assembly from the agency Mohammad Nazir.

“The government authorities in our last Jirga sat on 20th May 2015 as the threshold for our repatriation process but none among their ranks approached us till day. It has been almost a year since we have been living miserable lives but they turn deaf ear to our troubles and hardships”, Malak Jan Faraz Wazir said while addressing the grand meeting.

He further added, “We are left with no other option but to take our luggage and leave for Miranshah along with our families without taking into account, the imposed curfews and military operation there”.

MNA from NWA Mohammad Nazir while expressing his views at the occasion said, “I request the Jirga elders to give me a time span of ten days so that I can raise the matter at the floor of national assembly of Pakistan”. He expressed hope that he will discuss and take all the responsible authorities on board over the issue before the elders take any stride leading towards harmful consequences.

The elders decided to sit together in a Jirga on 1st June so as to discuss their future plan.

“All Dawar and Uthmanzai elders and youth are supposed to ensure their presence in a grand Jirga scheduled on June 1, 2015 as on that day the elders will decide whether to die under the prevailing plights or to take ways leading straight to Miranshah and Mirali”, Malak Khan Zeb revealed to the Jirga.

The government of Pakistan revealed their repatriation strategy for displaced people of NWA and the first phase was kicked off on March 31st, 2015 and lasted till 24th April 2015. Initially only three villages of tehsil Spin-Warm; Shameeri, Mirali Spinwarm and Shashy-Khel were addressed. However the people from Miranshah and Mirali tehsils, the worst affected tehsils during the operation Zarb-e-Azb, were not given any detailed plan for their repatriation.