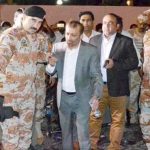 On 22 August 2016, at least one person was killed and 11 others, including law enforcement officials and media personnel, were wounded when the activists of Muttahida Qaumi Movement (MQM) resorted to large scale violence following incitement to violence in a telephonic address by the Movement’s chief, Altaf Hussain.