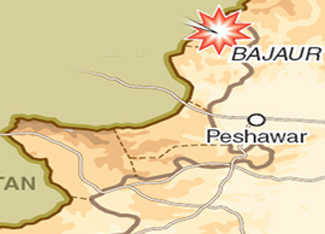 18 Bodies of Militants Found in Bajaur

BAJAUR AGENCY, Sept 19: The Security forces on Wednesday claimed to have recovered 18 bodies of militants during a search operation in the areas adjacent to the Pak Afghan border in Salarzai tehsil of Bajaur agency, official said.

The official told journalists that the volunteers of the Salarzai Qaumi Lashkar and the security forces had found the bodies in various areas after taken full control of the border villages of the area that had been occupied by TTP fighters since August 24.

18 bodies of the militants killed during the clash with the security forces had also been found on September 10 after the militants fled from the area.

“The security forces and the volunteers of the peace committee have continued their search operation in the various parts of the area along with the border and more bodies likely be recovered in the region,” the official said.

The official claimed that the security forces supported by volunteers of the Salarzai Qaumi lashkar killed at least 100 militants in the several border areas in Salarzai tehsil during the two week long operation.

He said that all the areas along with the Pak Afghan border was cleared and huge quantity of explosive devices planted by the militants were also recovered during the search operation.

Meanwhile, talking to media Assistant Political Agent Bajaur Agency, Jahangeer Azam Wazir said that tribesmen that had been displaced due to the fighting in the area would soon come back to their homes.

“The administration has launched a survey of the damaged houses and after completion of the assessment, the people will be allowed to return their homes,” he said.

According to the local residents, dozens of houses of the local tribesmen has been destroyed and damaged during the clashes between the security forces and militants in the border areas of Salarzai tehsil.