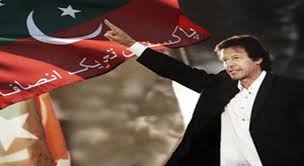 Peshawar, May 12: The electorates of Khyber Pakhtunkhwa have kept alive their electoral traditions by bringing significant political change in the province and voted for the Pakistan Tehrik-e-Insaf (PTI) led Imran Khan in the May 11 general elections.

According to unofficial results, PTI has been emerged as single largest political party in the province by grabbing 27 provincial seats so far. The party had sweep general elections 2013 in districts Peshawar, Nowshera, Mardan, Swat, Hangu and Kohat besides clinching seats from Hazara region.

In Peshawar, PTI had clinched all the four National and provincial assembly constituencies.

On Four NA seats, PTI Chairman Imran Khan from NA-I, Engineer Hamid-ul-Haq on NA-2, Sajid Nawaz on NA-3 and Gulzar Khan on NA-4 had defeated their rivals with overwhelming majority and clinched these seats.

The major upset in general elections 2013 is the defeat of former Federal Minister and ANP stalwart Haji Ghulam Ahmad Bilour at the hands of PTI chief Imran Khan on NA-1.

Similarly, PPP and ANP even could not save their safest provincial assembly constituencies of PK-2 and PK-3 and Syed Zahir Ali Shah and Haroon Bilour were defeated by little known candidates of PTI.

JUI-F is likely to emerge the second largest parliamentary party in Khyber Pakhtunkhwa assembly as it had resisted the onslaught of tsunami in its stronghold of the southern districts. Quomi Watan Party (QWP) of Aftab Ahmad Khan Sherpao had also maintained its presence in district Charsadda from where its central and provincial chairmen had made it to National and provincial assemblies.

Similarly, PPP which was the second largest parliamentary party in the Khyber Pakhtunkhwa Assembly with 24 seats has managed only four seats that are included PK-71 Bannu, PK-89 and 90 (Chitral) Saleem Khan & Sardar Hussein and Syed Mohammad Ali Shah Bacha from PK-98 (Malakand Agency).

Critics and political analysts believe that PTI Chairman Imran Khan’s clear anti-US stance on the US policy of Drone attacks inside Pakistan territory, ANP’s failure to curb militancy, rising level of corruption and unemployment coupled with energy crises contributed for the defeat of ANP and the victory of PTI.