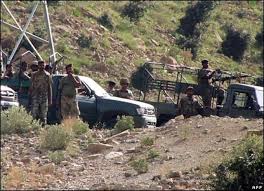 Attack on Military Convoy in Kurram

PARACHINAR, March 05: Six security personnel were killed and ten others were injured when a military convey was attacked through a roadside bomb here at Megai area of Central Kurram Agency on Wednesday, official sources confirmed.

Eyewitnesses and political officials while talking to FRC said that security forces convey was on its way to Kurram Agency from district Hangu when a remote controlled bomb went-off in Central Kurram Agency. As a result three security forces personnel died on the spot while eleven others were critically injured who were rushed to a nearby hospital.

However, three of the injured succumbed to their injuries at hospital while the remaining were shifted to CMH Peshawar for further medical treatment.

Banned militant outfit Ansarul Mujahideen has claimed the responsibility of the attack.

It is generally believed that militants due to the fear of expected military operation in North Waziristan Agency are approaching Central Kurram Agency for their safe hideouts.