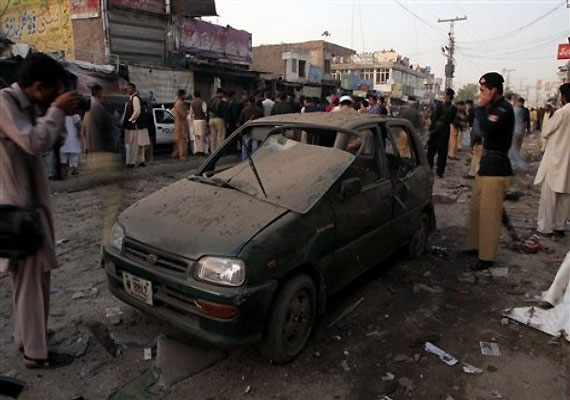 Parrachinar, June 24: A driver was killed and five others received serious wounds when a vehicle exploded with a big bang in lower kurram agency here on Sunday, FRC learnt.

According to details a vehicle carrying four people, including driver, exploded when an implanted explosive material went off near Karkhano check post in Sadda.

The incident came around 1.00 pm in afternoon and the car burnt completely.

As a result one person died on the spot while five others, including two pedestrians, were injured and shifted to hospitals in Sadda, Hangu and Parrachinar.

The deceased and victims have been identified as Iqbal Hussain (driver of the vehicle), Haji Shabbir Hussain, Mujahid Hussain and Baqir Hussain. The identity of the two pedestrians couldn’t be ascertained.

The political administration while confirming the incident said that it was an act of terrorism as all evidences shows that victims went to attend a wedding ceremony in Kharkhano camp in lower Kurram. On their way back they faced the ill fated incident which took the life of one person.

“It was an act of terrorism as some unknown persons had fixed explosive materials in their car during their stay at Kharkhano Camp”, said APA Lower Kurram Abdul Ghafoor Shah.

Mr. Shah refuted the media reports about the involvement of the sufferers in a bid to smuggle lethal weaponry to Parrachinnar from Lower Kurram Agency.

“All the four hails from Mali Khel village of Kurram Agency and went to attend a wedding in Teendo village of lower kurram on Sunday”, elaborated by Mr.Shah.

Later on, the funeral prayer of Iqbal Hussain was offered in Parrachinnar.

Meanwhile, tribal elders and religious leaders of Kurram Agency have launched a protest rally in Parrachinar here on Sunday against the suicide attack on Madrassa Alama Arif Hussain al Hussainy in Peshawar that came on Friday.

The participants of the rally chanted slogans against the provincial government upon their failure to provide proper security to the said institution.

Soon after the attack on Madrassa Al-Hussainy, it’s principal, Allama Syed Jawad Hadi, did a press conference in Parrachinar and highlighted the improper security arrangements for the institution.

“We launched complaints a number of times about the inefficient security arrangements of the Madrassa but the authorities didn’t lend their ears”, said Jawad Hadi.

The Madrassa was named after the death of Allama Ayed Arif Hussain Al-Hussainy who was shot dead by unknown persons on 5th August 1988 in Peshawar.