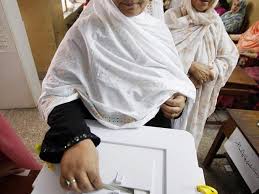 KHAR, May 17: Less than three percent female exercised their right of franchise in Bajaur Agency during the recent general elections 2013 that spread a wave of disappointment among the members of the election commission, an ECP official told FRC field reporter.

According to details only 2,800, out of 133,627, female voters casted their vote in the two National Assembly constituencies of Bajaur Agency. This happened despite the assurances from the contestant candidates to the Election Commission of Pakistan that they would allow the female to exercise their vote right during this election.

An per the ECP official, the low turnout of women voters in Bajaur is a matter of disappointment for the commission as around 130,827 women have been deprived of their right to vote.

“We were expecting the turnout of women voters over 10 per cent as the political and religious parties candidates had promised before the polling day that they would allow the women to cast their votes on May 11”, the official said and added that the parties did not fulfill their commitment.

He said that the ECP had received reliable information that tribal elders, religious and political leaders and some of the candidates were involved in barring women from voting.

“We have brought the issue into the notice of local administration and proper investigation would be launched soon,” he said.

Mostly the female voted in Barang and Salarzai tehsils of the agency that comes in NA-44 constituency.

According to the locals the PML-N candidate Shahabuddin Khan, who won from NA-44, and Badam Zari played an important role in encouraging the area women to cast their vote.