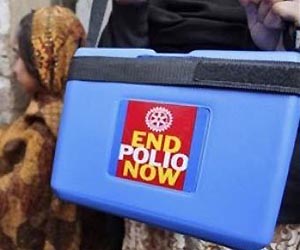 Posted By: Anwarullah Khanon: May 21, 2013In: NewsNo Comments
Print Email

“The miscreants were hiding in the fields and attacked the health team with automatic weapons in the Kalan village of tehsil Mamond”, said APA Bajaur and added further that the attack came at moment when the team had just started vaccination drive in the area.

The deceased who was identified as Akbar Khan, personnel of Bajaur levies force who was escorting the immunization team, died on the spot. However the workers of the polio-team remained unhurt in the attack.

After the attack, the miscreants managed to escape successfully from the site of the incident.

Later on officials of Bajaur levies force and members of peace committee reached and cordoned off the area and started search operation.

However, in the late hours of Monday evening, an official of the administration confirmed to FRC that at least five suspected have been arrested during the search operation from tehsil Mamond, but refused to give any details of the person arrested.

“We have launched an investigation of the incident and so for five persons that could be involved in the attack have been arrested in the search operation,” the official added. The detained persons were shifted to Khar for further investigation.

No one, till the filing of this report, has claimed the responsibility for the attack but the administration accused militants for the shooting.

According to Dr Jehan Zeb Dawar, head of the local health department in Bajaur, 624 polio teams are taking part in the three days anti polio vaccination drive across the agency that took off from Monday where 223,570 children would be vaccinated during this campaign.

Dr Dawar elaborated that, “Female workers will not taking part in the current anti polio campaign due to the security threats”.

The local administration beefed up security of polio teams across the region following the attack. For this purpose hundreds of additional personnel of Bajaur levies force have been deployed along with the polio teams at several sensitive areas of agency.