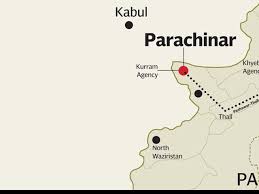 Kurram Agency, Nov 20: A joint meeting of Shia and Sunni tribal elders was held in Parrachinar, the headquarters of Kurram Agency, here on Tuesday wherein they condemned the Friday’s incident at Rawalpindi and urged the government to put the involved culprits behind bars, FRC learnt.

The meeting was also attended by the high-ups of political administration, religious scholars and tribal elders of both sects (Shia and Sunni).

“It were the joint efforts of area’s tribal elders, religious scholars and the security forces that kept peace intact during the first Aushra (Ten days) of Moharram-ul-Haram”, said Mr. Mehsud.

Mr. Mehsud also condemned the Fridays’ incident at Raja Bazaar in Rawalpindi and urged the government to bring the culprits into justice as soon as possible.

“It seems that some anti-state elements were involved in Rawalpindi incident”, said the Political Agent.

Notable tribal elders, Haji Saleem Khan, Akhundzada Mohammad Akram and former Senator Sajjad Syed Mian also spoke at the occasion. The elders said that anti-state elements are trying to spread unrest in our country but we will never let them materialize their nefarious objectives.

“It is our responsibility to defeat the anti-state elements in our areas as without our support the government can’t beat terrorism”, said the elders.

“We have to play our role in creating intra-religious harmony in our country otherwise it would take our society in grip”, revealed by the elders.

Meanwhile in another development from the agency, leaders of Hussainni movement strongly condemned the Rawalpindi terrorism incident. The leaders of the movement were speaking during a press conference here at Kashmir Chowk, Parachinaar on Tuesday.

In Rawalpindi on 10th Muharam certain elements created havoc in a peaceful religious procession and opened indiscriminate firing that killed dozens of innocent people besides damaging more than hundred shops.

It is worth mentioning here that no terrorist activity was reported from Kurram Agency during the first Aushra-e-Muharam. The agency had previously witnessed a number of sectarian clashes in past.